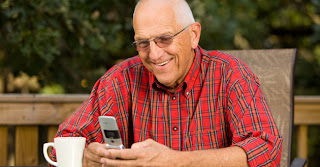 Despite the jaw-dropping accomplishments  of impressive senior citizens , our amazing elders suffer under the malodorous stigma that they somehow stink. Plenty of jokes can be found throughout pop culture suggesting the existence of a notorious Old Person Smell. Thankfully, science  is here to save the day and prove that unfounded stigma is false. It turns out that the spice scent from the Old Spice Guy  is actually old after all!
Chemosensory experts discovered that old people do have a smell... but it's actually preferable to the one produced by younger folks. The researchers conducted the study by having a huge range of volunteers from multiple age groups all shower with odor-free soap and go to bed in scent-free linens. Researchers then gathered up the the volunteers' shirts, cut out the armpit pads, and separated that cloth by age group. The samples were well-mixed within their own age groups so that an individual's odor couldn't influence the result.
A subsequent group of 41 volunteers received the unenviable task of sniffing those armpit pads and then rating their preferences. The scent of 75 to 95-year-olds turned out to be far less intense and much more pleasant than the scent of young or middle-aged adults! The nastiest smell was produced by 45 to 55-year-old men. In general, men smelled worse than women, but that distinction faded away with age. The beleaguered sniffers could even identify similar scents, grouping the smell of age groups together.